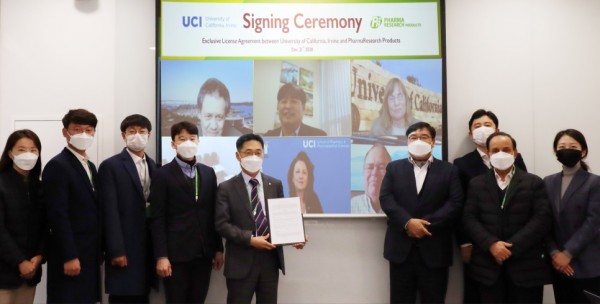 PharmaResearch Products, a leading company in regenerative medicine, is challenging the development of next-generation anticancer drugs that can overcome the limitations of existing anticancer drugs through state-of-the-art nanotechnology using nucleotides.

PharmaResearch Products (CEO Kang Ki-Seock and Kim Shin-Kyu) announced on the 23rd that they signed a patent agreement with the University of California Irvine (UCI) on the 21st. The two sides celebrated the contract with a non-face-to-face online contract following the spread of COVID-19.

The newly developed technology revolutionizes the drug delivery system of existing anticancer drugs to make it easier to access organs, and has shown interesting results that far exceed the safety and validity of existing anticancer drugs. So far, the patent, which has been constantly co-studied by UCI and PharmaResearch, is jointly owned by both sides, and this contract is a contract for the exclusive use of UCI shares. In the future, PharmaResearch will have exclusive rights to develop new anticancer drugs, including research, development, and global sales, using this patented technology.

"With this exclusive right to implement contract, we will strengthen our new pipeline in the anti-cancer and continue to improve the quality of life of mankind," a PharmaResearch official said.

Meanwhile, the research is being conducted through a joint study with Professor Kwon Young-Jik, who leads the UCI BioTEL (BioTherapeutics Engineering Laboratory), one of the world's leading groups in the field.

Professor Kwon, a world-renowned authority on nanobio-pharmaceutical and biomaterial research, is a promising Korean scholar who earned a doctorate degree at the University of Southern California (USC) in 1998 and a postdoctoral degree at UC Berkeley. He was awarded the Young Professor Award by the National Science Foundation in 2010 and the Medical Research Award by the Gabriel Angel Cancer Research Foundation in 2011.